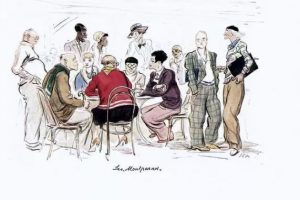 Framed original watercolour & pencil by Pegaret Anthony.  – possibly a companion/preparatory piece for her 1943 Women At Work wartime series some of which are in the Imperial War Museum collection.

An English artist and lecturer in historical costume and theatre history.  She was also a portrait artist,  working in various media – watercolours, oils & pencil. She is most noted for her Second World War pictures of women engaged in war work.

1934/38 she was a student at the Central School of Art and Design and during the 1930s she was heavily involved in costume, theatre and fashion-related activities. She was in charge of the décor and scene painting for a production of Shaw’s Saint Joan in 1938, and was the chief designer for the 1938 Birmingham Centenary Pageant.

She returned to the Central School in 1944, lecturing in Historical Costume for almost forty years. In the 1960s she provided to historical costume advice for several feature films, including 55 Days at Peking (1963), and The Fall of the Roman Empire (1964).

The Goblin Tower by Antonin Kyriakoulis.

Kyriakoulis was born in Athens and works as a painter, set designer and cartoonist. Beginning his studies in Anargyrios and Korgialenios School of Spetses he went on to study Graphic Arts at Doxiadis School (1960-64), and completed his studies at the London College of Printing.

From 1972 he turned his attention to scenography and costume design working both as a designer and board member of the Greek National Opera.

Exhibited across Greece he bridges the gap between illustration and fine art creating a strange, fantastical and  subversive world. 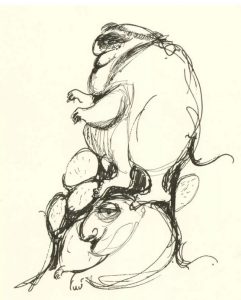 Not a picture of the week in the usual way !  People have often asked me “can you do a caricature from a photograph”?  to which I have only been able to reply – sorry no, I’m not an artist myself.  However I can now give a different answer – No, but I know someone who can!  Local artist Angela Bell (Ang Bell Art) is now the Off The Wall “House Caricaturist”.   She did this great caricature of me!   If you want to contact Ang just contact me at the gallery/shop. 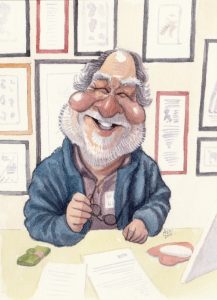